The main lesson from Étape Loch Ness last month was a fairly simple one: Pace yourself you idiot!

The first 55km (~34 miles) around Loch Ness were reasonably flat and I knew that I was going to be very slow up the big hill in the middle, so my strategy was to go as quickly as I comfortably could until the climb.  Of course, when I got to the hill I had virtually nothing left in my legs… and by the top they were empty.  Those last 20 miles hurt. A lot.

So I checked out the route for last weekend knowing I’d need to do things differently.  Rather than rush to make up time on the flat sections, the new plan was to focus on my average speed, keeping it above the 13mph ‘pace car’ speed.  I figured that I’d be slow going up the hills still, but I could make up for that coming back down and it would all balance out.

Oh, and I also changed my rear gears a few weeks ago (sadly, not until after Loch Ness), adding a few more teeth and making the hills just a little easier…

So, it looks as though there’s less climbing for Caledonia, but in fact there’s nearly 300m more ascent, and it starts almost immediately with a lot of short-but-steep climbs for the first 17km.

So far, so good.  I didn’t race off from the start.  I did get overtaken going up the hills.  I did catch back up coming back down the hills.

Then, just past Tummel Bridge, we took a right-turn and headed up what Strava tells me was a category 3 climb.  It’s just over 4km long with a gradient in places of 12%, and it took me almost a half hour to reach the top.  But I did reach the top, and I reached it without stopping.  I even managed to give the photographer at the top a little wave and a (almost) smile.

Another big ‘tick’ for the new strategy (and/or the new gears). 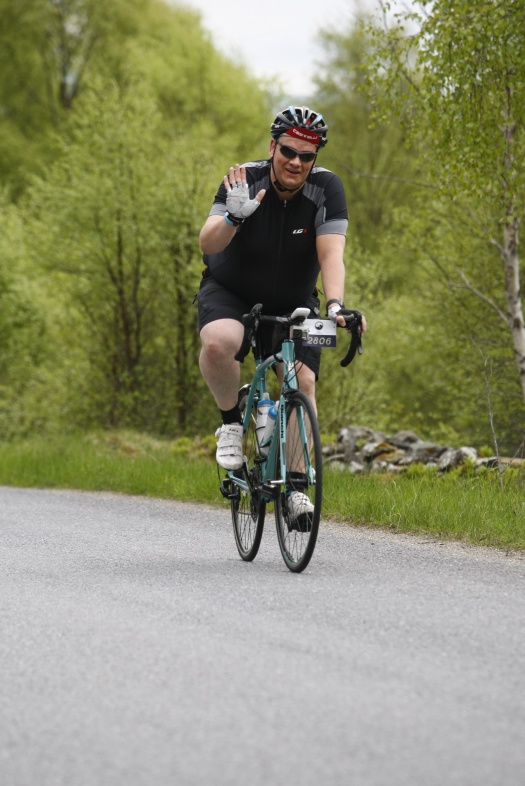 All the same, the descent down towards Kinloch Rannoch and the first of the feed stations was a welcome one!  I didn’t even mind the little spatter of rain that fell just as we arrived….

From there it was around two hours of fairly flat cycling around Loch Rannoch to the second feed station.  This was my favourite part of the day, and not because it was the least painful (though it certainly was).  The views as you cycle around the edge of the loch are stunning, as are some of the cottages and gardens (which really must take some skill given the winter climate there can be… challenging).  The giant topiary dog looking down on the road on the north side of the loch always makes me smile.

This was also the section of the route with the official “Lord and Lady of the Loch” challenge – an 18 mile ‘sprint’ along the north shore of Loch Rannoch.  But slow and steady was the name of the game, and slow and steady I went.

When I reached the second feed station I was on an average speed (including the time spent standing about at the first feed station) of just over 14mph, right on target.  Which meant I had time to stop and have a couple of pieces of flapjack to get some energy back before… Schiehallion.

There is more than 8km of riding from the bottom of the mountain (it is an honest-to-goodness mountain!) to the highest point on the road.  I’ve gone up it on a bike once before and on that occasion I had to walk a chunk of it.  I was not looking forward to tackling it again…

But actually, it was okay.  I mean, not the most enjoyable thing I’ve ever done – particularly the section with a 16.2% gradient – but it was… okay.  And no walking this time.

It was quite a nice surprise to get to the top of Schiehallion with legs and spirit still intact.  There were around 50km (30 miles) still to go, but hey, I’d done the big scary mountain and it was all downhill from there… or so I thought.

At the bottom of the descent from Schiehallion (which was fun and fast!) you take a sharp turn and head along a road through Glen Lyon.  There wasn’t much wind on the day, but what there was got funnelled straight down the Glen, right into our faces.  That was an extra workout that I really didn’t need and it just drained all the strength from my legs.

You’d think that would be okay because at the bottom of the Glen we turned around and came back, with the wind at our backs.  Except here we were on a fairly narrow track with just enough lumps and bumps to negate the tailwind, and a surface with just enough potholes, gravel and cracks to make it tough to cycle.

In all I was in the Glen for just over 30 minutes, but it felt like hours.  By the time we turned back on to the road I was too tired to find anything funny about cycling through a village called Dull.

There’s not much to say really about those last 16 miles in to Pitlochry, except that the story of Étape Caledonia wouldn’t be complete without mentioning the hill at Logierait.

About 7km from the end the route takes a left off the main road onto some single-lane farm roads which lead into Pitlochry.  For 1.5km these farm roads are what you might call ‘undulating’, starting with a sharp 20m section with an 18% gradient (the 2nd steepest part of the entire route) and finishing with another climb stretching for nearly 1km that also touches on 18.5% (the steepest on the route) for a time.

I don’t know who thought that those gradients just before the end were a good idea when planning the route.  Whoever they are, they’re not right in the head.

Thankfully, from there it was a relatively painless roll back down into Pitlochry.  By the time I was riding up the short hill to the finish line I could hear the crowd and the commentator and it was enough to get me over the line with a smile.